Anatomy of the Cannabis Bud

From the multicolored trichomes to that perfectly shaped nugget, the cannabis bud is one of the world’s most versatile plants!

Have you ever wondered about the anatomy of the cannabis plant? Or perhaps you’re curious about the cannabis bud or flower. This unique and exciting plant has been used by different civilizations for thousands of years for various purposes.
After being widely used in the 1800s and 1900s, cannabis soon found itself on the wrong side of the law in many countries when it was deemed illegal in the 1930s. After several decades, cannabis is once again making its way back into the forefront of our civilization as various states and countries look at legalizing the plant for medicinal and recreational purposes.

The cannabis plant is like many other plants. It usually lives and dies within one season, just like peas, corn, or even lettuce. Cannabis plants have two sexes, female or male, but the one which is most commonly grown and harvested is the female plant because it produces buds without seeds.

It has been used for hundreds of years for medicinal purposes, and some of the earliest medications produced contained large amounts of cannabis. Hemp is a variety of cannabis that’s grown for commercial purposes to produce goods such as rope, clothes, paper, and oil. Almost all CBD products use CBD, which has been sourced from hemp plants. Hemp contains high amounts of CBD, but only small amounts of THC (usually less than 0.3%). Hemp seeds and hemp seed oils are found in various health and wellness stores around the world.

Cannabidiol (CBD) is one of over one-hundred different cannabinoids found in the cannabis plant, and unlike tetrahydrocannabinol (THC), it’s not psychotropic and won’t get you high. CBD is used in various therapeutic and health and wellness products.
There are three main types or strains of marijuana plants. The three strain types are indica, sativa, and hybrid, which is a combination of both indica and sativa. Most hybrid strains are usually dominant to either sativa or indica, but there are some balanced hybrid strains.

In the following article, we’re going to take a closer look at the anatomy of the cannabis bud, what the different parts of the bud are called, and what their purpose is.

What Are Cannabis Seeds?

Cannabis seeds are a result of pollen landing on the stigma, which are the small red hairs found on the cannabis flower or bud. Pollen tubes that emerge from the pollen grains then travel down via the stigma and style after pollination has been completed, fertilizing the flower’s ovary.

Cannabis seeds are extremely high in fatty acids, which is why so many people consume them as a nutritional product on their own. Although the exterior of the seeds sometimes has cannabinoids present because of their location in the bud or flower, the seeds themselves contain almost no cannabinoids. It’s because of this that you should never purchase CBD oils, which are made from hemp seeds.

Usually, hemp seeds are light-colored, and marijuana seeds can vary from a light color to an extremely dark color. It depends on the maturity of the seeds. If you have a selection of different marijuana seeds and you’re trying to decide which ones you should plant, always choose the darker, firmer seeds as they are considered to be healthier.

The cannabis bud or flower is made up of a variety of different yet important parts. In this section of the article, we’ll take a closer look at the different parts of the cannabis bud. 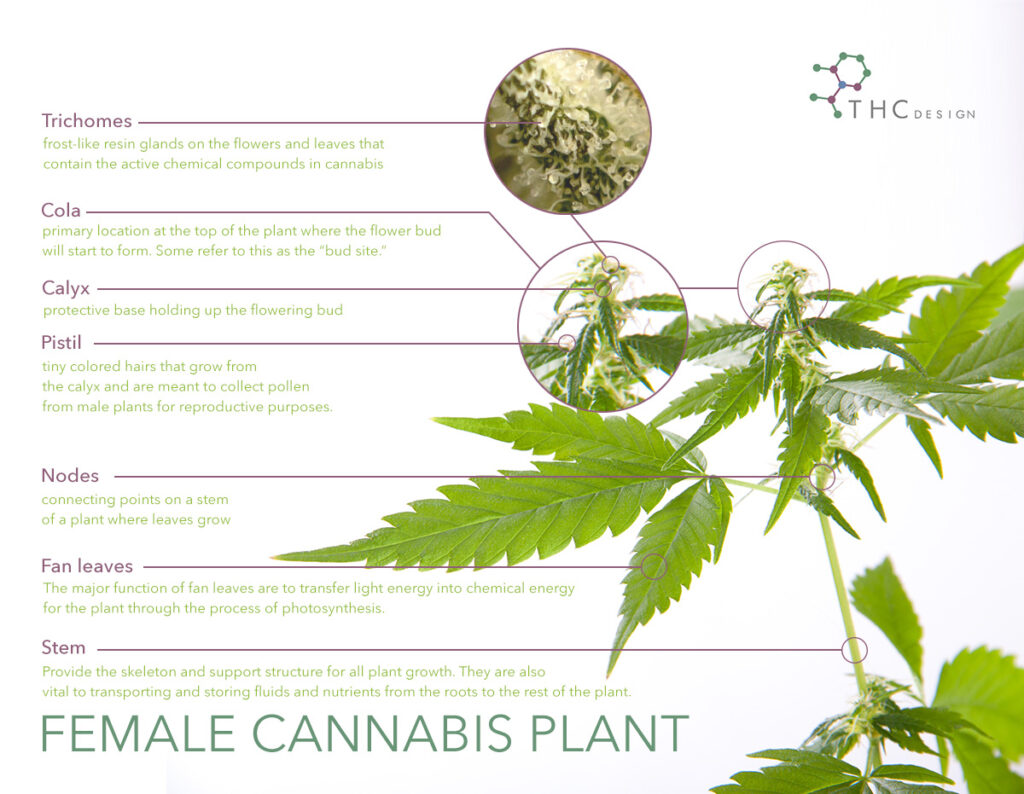 There you go! The next time you’re checking out your favourite cannabis bud, you’ll have a much better idea about what all the different parts you’re looking at are called and do!